What people with cancer should know: https://www.cancer.gov/coronavirus

Get the latest public health information from CDC: https://www.coronavirus.gov

Get the latest research information from NIH: https://www.nih.gov/coronavirus

NCORP Site and Research Base Administrators participated in an additional dedicated meeting.

Acting NCI Director Douglas Lowy, MD, said he really appreciated what the NCORP sites are doing. “Your dedication in conducting trials and referring patients for prevention, screening and treatment, are important and are providing high quality care for patients in the community where the vast majority of patients receive their care,” he said.

While the program is going extraordinarily well and the important aspect of cancer care delivery has come to fruition, the amount of funding is not sufficient, though it did increase by $30 million this year, Dr. Lowy said. He noted that just under 50% of patients accrued in the MATCH cancer treatment trial were from NCORP sites, and NCORP is participating in other important trials, such as FORTE and TMIST, both trials of screening, and the New Onset Diabetes (NOD) project. Another effort he mentioned was the Early Onset Malignancy initiative which is aimed at addressing the imbalance in previous genomic research where underrepresented minorities were underrepresented. He said he hopes after enough patients are accrued NCI can say it has information for these cancers in underrepresented minorities comparable to what is in The Cancer Genome Atlas.

Reviewing the previous year, NCORP Director Worta McCaskill-Stevens, MD, told meeting attendees that the new round of grantees is standing on the shoulders of the first 5 years of NCORP accomplishments. “If we take the wisdom of the first 5 years, we can move towards our goal of further providing to our cancer care networks,” she said.

It took a lot of work to make NCORP a reality, Dr. McCaskill-Stevens said, including: seven Research Bases assembling clinicians, scientists, and administrators to develop and support NCORP’s research agenda; 34 Community Sites and 12 Minority/Underserved Sites committed to providing cancer clinical research in their communities; partnerships at the community, institutional and government levels; and individuals willing to embark on a journey into clinical trials for improved outcomes for themselves and others.

Deborah Winn, PhD, acting director, NCI Division of Cancer Prevention, called NCORP one of NCI’s most important and largest initiatives, with incredible strengths in prevention, treatment trials, disparities research and making sure the entire U.S. is represented within NCORP. Paul Jacobsen, PhD, noted that outreach to rural populations is an important focus of NCI programs. The CCDR component has received strong support from NCI leadership, he said, calling NCORP the premiere laboratory in the U.S. for generating findings with broad implementation, particularly in representing minority and underserved populations. Ann Geiger, PhD, lead scientist for the NCORP CCDR portfolio, said there has been a rapid acceleration of CCDR studies and the NCORP sites have exceeded expectations, adding that the NCORP network is one of the only places where this data can be gathered. 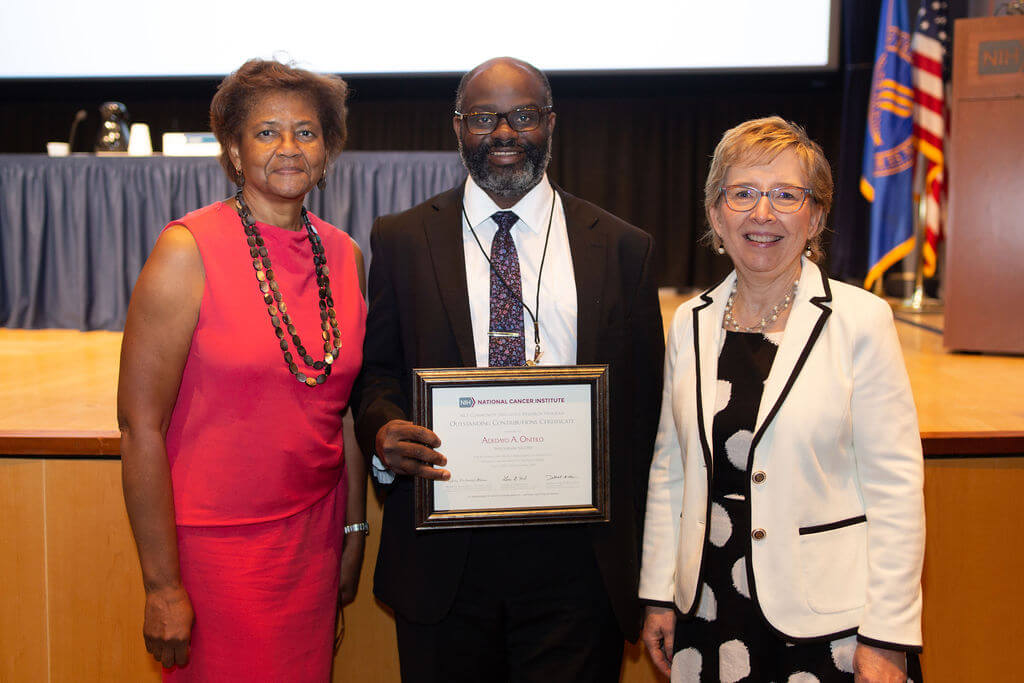 Adedayo A. Onitilo, M.D., of the Wisconsin NCORP, was one of three principal investigators to receive a top treatment trial accrual award. NCORP Director Worta McCaskill-Stevens is on the left, and NCORP Program Director Marge Good is on the right. 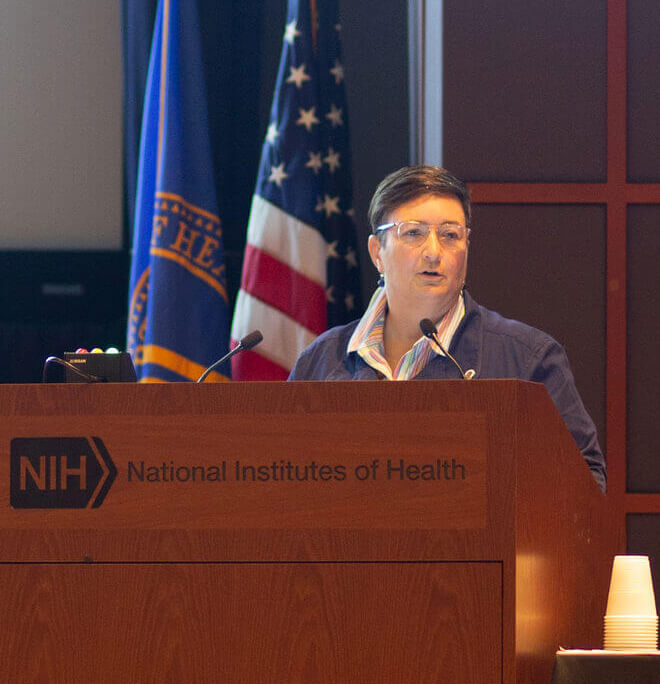 On the opposite end of the age spectrum, Lodovico Balducci, MD, Senior Emeritus at H. Lee Moffitt Cancer Center & Research Institute, who has been called the “father of geriatrics,” spoke about cancer in the “oldest old” and opportunities for geriatric oncology in NCORP. This was followed by a panel discussion with contributions from Judith Hopkins, MD, of Southeast Clinical Oncology Research (SCOR) Consortium NCORP, Heidi Klepin, MD, of Wake Forest NCORP Research Base, and Aminah Jatoi, MD, of Alliance NCORP Research Base. The symposium was inspired by the legacy of NCORP Principal Investigator Arti Hurria, MD, who died tragically in 2018. Dr. Klepin called NCORP “uniquely suited” to test implementation of geriatric assessments (GA), Dr. Hurria’s professional focus, in the areas of directed treatment for the frail elderly and GA-guided supportive care, care delivery, tolerance and efficacy of standard therapies among the elderly.

Edward Kim, MD, talked about the progress that has been made in broadening eligibility criteria in cancer clinical trials since 2015, during which time a 90-person working group representing patient advocates, pharma, NIH, nurses, pharmacists, and others, has published a series of six papers. He estimated that 19 of 20 patients currently do not enroll in cancer clinical trials, and there is an average of 35 eligibility criteria per trial.

Recognition and Awards Given