The impact of the COVID-19 pandemic on cancer research and clinical trials, and the growing use of telemedicine garnered much of the focus during Part 1 of the annual meeting of the NCI Community Oncology Research Program (NCORP) on Aug. 31. Part 2 scheduled for October 6, will focus on progress and practices in cancer care delivery research.

The 14th Harry Hynes Award recognizing excellence in community-based research was presented to Vincent P. Vinciguerra, M.D., of the Northwell Health NCORP. The outstanding NCORP administrator award, renamed the Dorothy Coleman Outstanding Administrator Award, was presented to Erika Radeke, M.P.S., of the Stroger Hospital of Cook County Minority/Underserved NCORP. The NCORP appreciation awards did not include accrual recognitions due to disruptions from the pandemic.

Representatives from all of the network’s seven Research Bases, 32 Community Sites and 14 Minority/Underserved Community Sites participated in the meeting, which was held virtually for the first time. The new group of NCORP elected representatives to NCI steering committees and task forces beginning 3-year terms on October 1 was announced.

NCI Director Norman E. (Ned) Sharpless, M.D., told meeting participants that since the beginning of the pandemic NCI has sought to support the cancer research community, which has dealt with closures of hundreds of labs throughout the country, the stalling of clinical trials, and tremendous uncertainty. The community’s resilience has allowed the adaptations to keep going despite it all, he said. Ongoing NCI wide activities include contributing to research on the virus directly; investigating the effects of COVID-19 on people with cancer; and seeking to understand and mitigate the long-term effects on cancer patients.

Calling the NCORP program a force for good amid the challenges, he urged meeting attendees to participate in collective action to reduce cancer incidence and death in a way that is safe for patients and caregivers during the pandemic. NCI CISNET modeling shows the pandemic could result in 10,0000 excess cancer deaths, he said. Multiple analyses in several countries confirm a massive reduction in both cancer screening and diagnoses, which means in the future more diagnoses can be expected to occur at later cancer stages. Increased morbidity also is likely, as is the exacerbation of racial disparities given the pandemic’s disproportionate impact on communities of color.

Shifting to a positive note, NCORP sites have led the way in minority accrual to NCI clinical trials, Sharpless said. While cancer research cannot solve systemic racism, he said, we can look at our work as individuals and as a community of practice and commit to taking action where we can, such as making sure clinical trials are reflective of our communities, working to overcome cancer disparities, and improving the diversity of our workforce. He noted this is a hard problem with multifactorial causes, but progress is being made.

New director of the NCI Division of Cancer Prevention (DCP), Philip Castle, Ph.D., M.P.H., said the science supported by DCP is translational, and NCORP, the largest DCP program, plays the most important role in the division’s efforts to test new interventions in a controlled environment to see their effectiveness and to measure and alleviate any side effects. These trials provide knowledge about the efficacies of interventions to specific groups of people. NCORP research reflects the nation’s diversity so the evidence generated contributes to improved patient outcomes and reduced cancer disparities for all people, he said. Through cancer care delivery research (CCDR) studies, vital knowledge is supplied about how interventions work in the real world and how to make them work in the systems that provide health care.

“While DCP does not fund research to translate findings into the community, we know that community investigators who have been involved in clinical trials, you, are key to adopting new, proven therapies and applying them to those who will benefit,”
Philip Castle, Ph.D., M.P.H.

Robert Croyle, Ph.D., Director, NCI Division of Cancer Control and Population Sciences, thanked the network for helping expand NCORP’s scientific mission to include CCDR. Over 9,000 clinicians and patients have been accrued to CCDR studies so far, and 21 studies have been launched, one third of which have already reached accrual goals. NCORP as a research platform is a resource for investigators in general to collaborate on important research questions, he said, noting six additional R01 grants have been funded. While many questions in health care delivery have been exacerbated by the COVID crisis and more high-quality evidence is needed to inform decisions about health care delivery, NCORP is positioned to answer those questions, he said.

Worta McCaskill-Stevens, M.D., M.S., NCORP director, discussed the network’s need to recognize opportunities while enduring COVID-19. She noted that accruals were down overall due to the pandemic, and activation of new trials were halted temporarily but are now reactivating. Highlights of ongoing research activities included a quality of life trial embedded into treatment trials, NRG BN007, which focuses on cognition, and complements NCORP symptom management research. Another example was the Biomarker Imaging Quality of Life Studies Funding Program, which included the phase 3 trials URCC-14040, NRG-GY004/005, E1A11, and A211901. Also, 12 NCORP sites are participating in the NCORP Tissue Procurement Protocol, an NCI Cancer Moonshot Study (10231), and for the newly launched Cancer Moonshot Biobank (10323), 20 sites are participating.

The pandemic has helped show there is no area in the NCORP portfolio not touched by disparities, she said, and it raises the question of which pandemic, COVID-19 or systemic racism and racial inequality. The NCORP disparities research approach continues to conduct sub-analyses by adding disparities research questions into existing concepts, enrich data in new studies, and pool data from completed studies.

Ann Geiger, Ph.D., M.P.H., NCI Division of Cancer Control and Population Sciences, said NCORP offers a unique opportunity to address systemic barriers to cancer care delivery. The program continues to grow as a laboratory for CCDR with a robust portfolio of trials being completed in reasonable time frames with results beginning to come out. Seven trials have closed, five trials have initial results pending, two trials had results reported at the ASCO 2020 meeting, and two concepts are in review. Disparities intervention areas to be addressed include the elderly, low socioeconomic status, racial and ethnic minorities, and rural residents.

Keynote speakers and panelists discussed the growing prospects of telemedicine as a new normal in health and cancer care. M.K. Holohan, J.D., director of the NCI Office of Government and Congressional Relations, said there has been both executive action and legislative proposals on telehealth put forth, such as state licensure and malpractice insurance. But this is not going to be resolved in one bill quickly as it is a myriad of complex issues. It is likely there will be some relief from state licensure soon as there is a broad coalition pushing for temporary and permanent changes. CMS expansion of telehealth during the COVID-19 crisis was dramatic with over 9 million beneficiaries using telemedicine between March and June 2020, a 5000% increase, she said. The cancer centers and private telehealth billing also has expanded in response to the acute needs.

Stephanie Krenrich, M.A., American Cancer Society, Cancer Action Network, federal relations director, said giving people with cancer, who are immunocompromised, options to not go into a provider’s office to receive care during the pandemic is important to the 50-plus organizations jointly advocating for patients in the telehealth space. One survey found that more than 90% of physicians have reported they are treating patients remotely now, she said. Next for telehealth is making permanent some of the temporary policy changes; service and payment parity for telemedicine care; telecommunications and internet infrastructure improvements; and robust data collection.

Since the pandemic began, issues facing the NCORP sites have spanned patient consent for clinical trials to patient education in using technology. Gary Doolittle, M.D., University of Kansas MU NCORP, a geographically large rural site, has been using telemedicine since the late 1990s to diagnose cancer, ongoing patient management, second opinions, tumor boards and other services in support of cancer patients such as palliative care and nutrition. He noted how difficult it is for many cancer patients to get to physician’s office, even just getting in and out of the car. In piloting a statewide project to assess the feasibility of offering clinical trials via telemedicine shortly before the pandemic, they found one of the biggest challenges to be patient consent. After COVID hit and rules were relaxed, they quickly saw adoption of telemedicine for cancer care and were able to address some of the barriers to clinical trials.

Brett Friday, M.D., Essentia NCORP, whose health system also covers a huge geographic area with very rural regions across Michigan and Minnesota, has been involved in telehealth since 2017 for clinical and research use. While they had the capacity in 2018 to provide clinical visits, the numbers went up significantly during the COVID crisis, he said. They have done remote consenting for years under local IRB guidance, and this has continued. He noted there are both pros and cons of telehealth.

Gary Schwartz, M.D., Columbia University MU NCORP, described telehealth from the perspective of the COVID crisis in New York. They had more patients than beds and PPE to accommodate them, but they were able to turn the crisis around. They instituted several measures for cancer patients, such as fever and temperature checking and PCR viral swabs. Clear racial disparities in COVID positivity was reflective of the neighborhood of the MU NCORP site, which is mostly Hispanic, with 20% living below the poverty line, and 50% of patients foreign born. All trials involving human contact were initially stopped in March; as the crisis has gone on, they adjusted remote consents for non-human contact trials; increased telehealth visits; and switched to oral drug shipments where possible.

Judd E. Hollander, M.D., Thomas Jefferson University, noted that healthcare was already changing in several directions before the pandemic, including the use of alternative payment models and giving patients care when and where they wanted it. In Jefferson’s 14-hospital emergency room practice, they have been using telehealth for several years for patient intake, urgent care, cost effective electronic visits, critical care and specialty consultation, virtual rounds, post discharge management, and remote monitoring. When COVID-19 hit, even as they lost staff due to quarantine, they were able to rapidly deploy and expand these services to forward triage with tents; conduct interprofessional collaborations; perform inpatient telemedicine, which saves personal protective equipment; offer family visits on devices; use an on-demand app for COVID and non-COVID urgent care evaluations, which protects immunosuppressed patients, and distances potentially infected patients; screen and test; monitor remotely, mostly for pulse oximetry; and maintain scheduled visits.

Research shows that many of their patients prefer telemedicine to in-person visits, he said, and the data suggests such an approach can be as good as an in-person visit. With video calls and the patient’s family or caregiver support, level 5 physical examinations can occur. Telehealth is a care delivery mechanism, he said, where quality care can be rendered in terms of how you translate the medical practice you would do in person to telemedicine, and having a “webside manner.” In addition, telemedicine engenders operational efficiencies in access to care and patient travel, decreased appointment cancellation rates, staffing, and level of care.

The federal relaxation of some rules during the pandemic, such as for traditional medical platform requirements versus FaceTime or Skype and reimbursement of telehealth phone calls, was incredibly helpful to providers and consumers to move quickly, he said. State licensing issues are in the hands of states, about half of which have parity laws. Going forward, telemedicine is about communication, trust, cooperation, workflows and operations, he said. Telehealth can help close the access problem for some of the uninsured who are unwilling or unable to have an in person visit. The digital divide exists, yet more people have smart phones than have health insurance, so telehealth is for “many patients some of the time.”

Speakers at the meeting included the NCI director, division directors and the NCORP director. 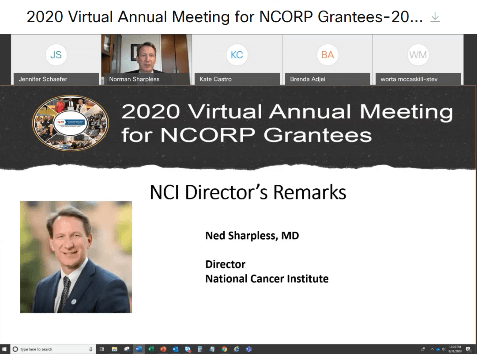 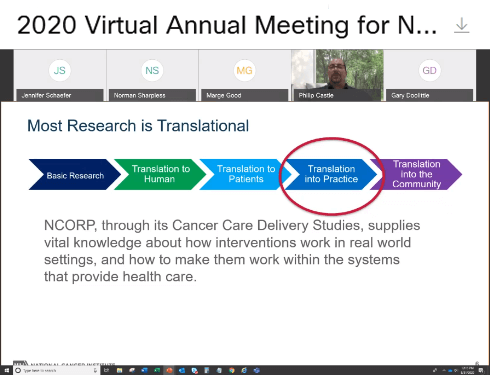 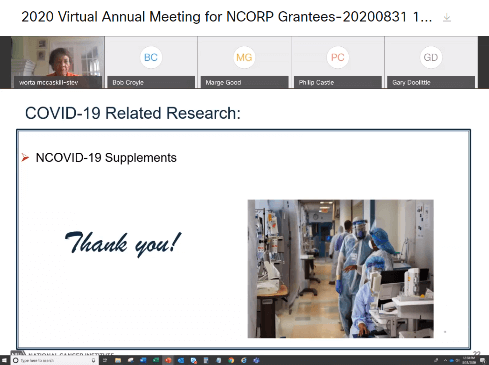 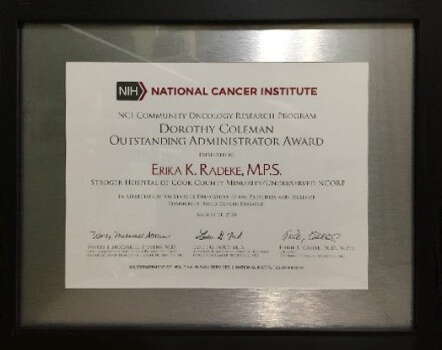 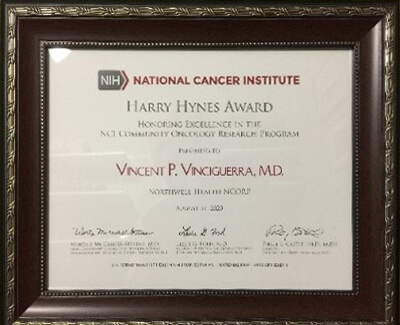